Breath – the Fleeting Intensity of Life by Vincent Ward

Breath – the Fleeting Intensity of Life by Vincent Ward

Vincent Ward’s video is a shortened version of a larger work that circulated around New Zealand Galleries in late 2011 and 2012. Much of the publicity surrounding those showings and the commentary around them seems to have been provided by Ward himself through interviews and written publicity material.

The version we see at Aratoi has two scenes. One shows a fat naked man lying in the middle of the road, in a deserted small town, at either dawn or dusk being approached by a white horse.

‘Breath – the Fleeting Intensity of Life’

This scene is either preceded or followed (the video is looped) by a longer sequence of a young naked woman encased in plastic film moving in slow motion. The plastic may be intended to represent the membrane surrounding an unborn baby. This sequence is a graceful, controlled and seductive dance of arms, legs and torso. The camera moves around the body as the body moves and changes frame and focus as it does so. The image explores the projected light on the body and plastic film and moves between a painterly abstract arrangement of colour, and blurred figuration. 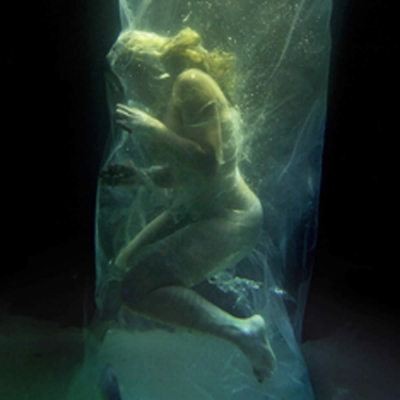 Cropped image from ‘Born in a Caul’

The white horse is an ambiguous symbol. It has sometimes represented exceptional power, as in Pegasus, but may be intended here to signal innocence and purity through the connotations of the colour alone. The white horse also apparently has some historical association with vitality, resurrection and birth. Written material associated with the work refers to Vincent Ward’s near drowning experience as a child and his childhood connection with the Ruamahunga River.

If the video is about drowning, it can be compared with the work of another video maker – Bill Viola. His ‘The Messenger’, 1986, uses an immersed male body in a similar way with comparable lighting effects but no encasing plastic film, voluntary movement or changing framing and camera angles.

Contrasting these two productions provides an insight into Ward’s way of working. If the work is about drowning, and the title ‘Breath the Fleeting Intensity of Life’ seems to indicate that it is, then his way of addressing this subject has, in my view, almost totally negated any serious content the video might claim.

The first job of an artistic presentation is to attract and hold attention. Ward does this well both with his naked man and horse scene and with the moving woman’s body. The horse scene has a strange surreal atmosphere which puts bizarre and intriguing elements together with the horse’s odd and fascinating gait. The body encased in plastic slowly moving around suspended in water is similarly riveting. However, the justification for all this is to articulate a coherent observation or statement. It was difficult to find any such substance in this work.

Part of the business of art is manipulating the viewer. Good work does this with purpose in order that the viewer confronts an issue of some sort. The interesting issue in Ward’s video clip was hard to find. Although the idea of drowning did occur to me, the viewer was an objective voyeur to the drowning, not an imaginative participant in the terror of it. Furthermore, the fact that the body was encased in plastic gives rise to the idea that the woman is being deliberately drowned or murdered. This is confirmed by a sudden flush of blood red colour that suddenly appears in the top left of the screen.

In a final analysis the video asks the viewer to watch a young woman drowning, or being murdered, in an underwater ballet and then to observe a fat man being approached by a white horse.

The questions the work raised for me eventually concerned the cynicism of Ward’s use of sensational imagery. His seductive and beautiful visual presentation engaged me in the compliant observation of the murder / drowning of a naked young woman. I was not happy to find myself complicit by passively watching what I concluded was misogynist sexploitation under the guise of philosophy, spiritualism and symbolism.